Men have conquered the arts since the beginning of recorded history. Most notable artists are males like Rembrandt, Vincent Van Gogh, Pablo Picasso and Leonardo Da Vinci – who all made a name in the field of culture and the arts and forever etched in history books. But how about women artists? I am sure there are plenty of women who made huge artistic contributions but only a handful probably know about them. 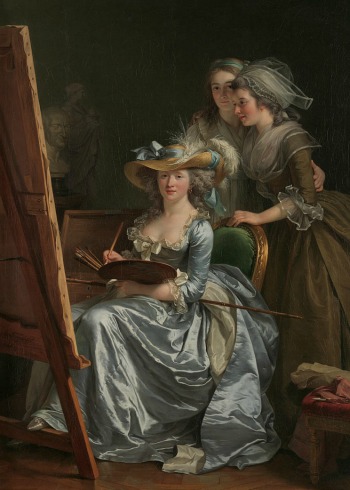 As we celebrate International Women’s Month, let us pay tribute to the contribution of women to the arts and how they continue to break out of the norms and share their talent and passion to the world.

Back in the day, it was very unusual for women to become professional artists, they were well known as domestic workers and child bears.

Things have changed women are taking over the male dominated industry by storm and are doing beautiful work.  We’ve seen Aleta’s work through Yebo Contemporary Art Gallery, Velemseni; the only left-handed female guitarist we have in the country, Bongie’s motion pictures and film, just to name a few.

Discrimination persists and may be one of the greatest obstacles women artists face in their professional career.

“Women artists have always been – and unfortunately continue to be – underrepresented in the art world.”

“This imbalance is in no way unique to the arts – it’s evident in all other major international exhibition of contemporary art has achieved gender parity and the highest-level jobs sectors of society where women earn less and are absent in management positions.”

She believes that the attitude to women artists has slowly improved but there is a long, long way to go.

“Many women still lack self-confidence and creative opportunities due to the restraints in our society. But I know that more women will rise up and become strong, independent and creative and lead the way. It is starting to happen.”

Just like any other profession, women in art too face different challenges. Everything comes with pros and cons but that doesn’t mean you have to give up.

Art exhibits done by women and for the women are set up all over the world to highlight women’s artistic capabilities and their contributions to society.

With this female art exhibition, for instance, we are not just celebrating the International Women’s Day, but strong women are trying to come together as a body and achievers to produce art that explains different events surrounding our societies. We are asking for change, and we want people to know that female artists are actually in the sector. Gone are the days when we sit down and watch our men take over the art space. We are not competing with men; we want to complement what they are doing. We want to come out; we want to speak and we want to express ourselves through our works.”

We should never underestimate the role of women in the today’s modern art.

“There’s women’s art, queer art, there’s black art, and then there’s the art that gets shown, which is not any of that,” Fagan said. “I wanted to create spaces for all this art but not have it pigeonholed as ‘this’ art.”

According to the National Museum of Women in the Arts, over half of visual artists in America today are women, though only 30 percent of works in commercial galleries are made by women. As of 2017, Fagan has managed five residencies with seven artists, hosting shows, events, and recently, a film screening. She also held a feminist conversation the day after the 2016 election. Since then, Fagan said, politics have become an ever-present part of the art community.

The times have changed and women enjoy more opportunities to express their passion for the arts. They can share their talents on a bigger platform and earn the admiration of many and with far less discrimination. Nowadays, the public is more interested in the work of art itself than on the gender of the person who made it. Women artists can still thrive in a field that used to be dominated by men and fill the world with art pieces that we can all admire and be proud of.