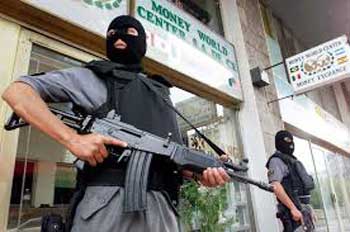 The lure of drugs is strong. For dealers, money motivates. For users, the desire for pleasure or escape usually prompts the entry into drugs. The quest to repeat the experience drives addiction.

Unwittingly, each user fuels an international drug economy that is built on violence, greed, and a callous disregard for human life.

The drug business is an ugly one, full of exploitation, wrecked health, and wasted lives. It also is a big business, the biggest in the world, with an annual volume exceeding $300 billion (some estimates go as high as $500 billion). But it is a big business that law enforcement agencies, national governments, and many small but powerful local initiatives are working to destroy. What are the chances of their doing this in the ’90s?

Once thought of as merely a health or a social problem for drug users and their families, drug abuse in the United States during the last five to 10 years has created a set of problems so destructive and far-reaching that solving them has become one of our country’s top priorities. Why? Consider:

* Chief Justice William Rehnquist of the U.S. Supreme Court reports tfhat the number of drug-related cases in the federal courts has risen 85 percent in the last four years.

* The U.S. Department of Justice says that half of all men arrested for serious crimes are drug users.

* Between 1986 and 1988, there was an 1,100 percent increase in the number of semi-automatic weapons (the weapons favored by drug dealers and also the weapons involved in several mass murders at school playgrounds in recent years).

* In urban areas, entire neighborhoods are taken over by drug gangs, making them unsafe for residents. Also, in these neighborhoods innocent children are often killed in the crossfire of warring drug gangs.

* The spread of the deadly disease AIDS currently is highest among intravenous drug users.

* Approximately one in 10 babies in the United States is born with illegal substances in his or her system.

Although the United States’ drug problem right now seems uncontrollable, we’re not the only ones with problems. Drugs have become a global issue. Use has dramatically increased in Europe and even in such previously untouched areas as the Soviet Union. Violence is a way of life–and a fact of life–for the international drug traffickers, where informants are routinely tortured and killed, and opponents are murdered by hired killers for as little as $10. And some Third-World countries’ entire economy is based on the illegal drug trade.

Take, for instance, Colombia, so much in the news in recent months. Cocaine is this country’s major export, bringing in more than $4 billion a year and supplying about 80 percent of the world’s cocaine. Entire villages in the Andes mountains depend on the coca leaf crop, from which cocaine is extracted, for their existence, not to mention the cities that have come alive from the conspicuous spending of the high-level drug traffickers. Medellin, the home of the country’s biggest drug cartels, or organizations, has million-dollar high-rise apartments equipped with huge satellite dishes for picking up American TV shows, expensive clothing and jewelry stores, imported cars, and other luxuries. Accompanying this opulence, however, is a staggering level of violence: Medellin has the highest murder rate of any city in the world not at war.

In addition, in many Latin American and Caribbean countries, the drug organizations have corruption on their side. With the drug traffickers’ policy called “plomo o plata” (which literally means lead or silver, or a bullet or a bribe), they have managed to buy off and scare people ranging from local police officers to a country’s highest leaders. In Colombia, this policy reigns supreme: Last August, a leading presidential candidate and anti-drug campaigner was shot down at an open-air political rally. More than 50 judges and two cabinet members were assassinated in the last two years after trying to crack down on the drug cartels. Making law enforcement even more difficult is the fact that in Colombia and neighboring countries, some elected officials are known drug dealers.

In Burma, the Southeast Asian country that is the world’s largest producer of heroin, the drug warlords have private armies to protect their businesses. There are no restrictions for crossing the border into neighboring Thailand. And the laws are such that dealers can only be arrested if they have possession of the drug — and they make it a policy never to touch it.

Clearly, the drug problem is complex and destructive. Here’s a closer look at this world issue.

The Big Three — And Where

Supply and demand. That’s what rules the drug trade. It’s classic Keynesian economics. Says a writer in the Spanish news magazine Cambio 16, “On the day that a pound of bananas is worth more than a pound of cocaine, there will be no more South American coca farmers.”

And, conversely, the day Americans stop craving drugs, the world supply will shrink.

Marijuana, cocaine, and heroin are the drugs with the highest demand worldwide. In the United States, there are 18 million marijuana and hashish users, 700,000 heroin addicts, and an estimated 7 million who regularly use cocaine.

Mexico actually supplies more drugs to the United States than any other country, growing its own marijuana and heroin and serving as an entry point for Colombian cocaine.

Colombia, Peru, and Bolivia produce almost all of the world’s cocaine. The coca plant thrives in the mild, high-altitude climate of the Andes mountains.

Most of the heroin that reaches the United States comes from the opium grown in the poppy fields of what’s called the “golden triangle,” where Burma, Laos, and Thailand converge. Iran, Pakistan, and Afghanistan also ship this drug to our country.

The majority of illegal drugs slip into our country through southern Florida and across the Mexican border — drop-shipped onto high-speed boats, packed into private planes, hidden in imported goods, and concealed on bodies. Customs officials say they’ve seized drugs in the most improbable places: in coffins, in flower shipments, in diapers, and in beer cans. They’ve reported heroin-laced shampoo and dog collars containing cocaine.

The Allure of Drugs

Once it gets here, the attraction of the drug world is particularly strong for inner-city kids who can make $200 to $3,000 a day selling crack. Some children start as early as 8 or 9 years old as lookouts for drug dealers, warning them when police enter the neighborhood. Lookouts make about $100 a day. In a few years they can graduate to “runners,” transporting drugs from the makeshift factories where drugs are processed to the dealers. Their salaries also graduate — to about $300 a day.

By the time they are teenagers, they can become “king of the street” or dealers. An aggressive crack dealer can rake in more than $15,000 a week. That’s more than half a million dollars a year. This money buys them the status symbols that make them neighborhood heroes–Mercedes Benzes, BMWs, Rolex watches, gold chains, designer clothes.

It’s no different for the South American peasant. The $1,000 offered by traffickers for every 2.5 acres to plant coca, whose leaf cocaine is made from, often means the difference between eating and starving. Nor is it different for the local poseros, or processors, who grind the coca leaf into paste. They fare even better: It’s not unusual to see color televisions in their shacks and four-wheel drive vehicles in their dirt driveways. And so it goes all the way up the ladder. The people who chemically process the coca paste, turning it into the powder form it is sold in, make even more. Pilots can earn $5,000 a kilo to transport the drug out of the country. And, of course, the leaders of the cartels are millionaires. Fortune magazine estimates Pablo Escobar, one of Colombia’s biggest drug barons, is a billionaire.

Big bucks are in the heroin trade, too. Opium from Burma costing $170 can be turned into $2 million on the streets of New York or Europe with minimal processing.

In the fight against the drug trade, the United States is making a full-blown assault. FBI. DEA. CIA. Coast Guard. Customs agents. Local police. Schools. Hospitals. The legal system. Congress. Everyone’s getting involved. The federal government budgeted $6 billion for 1989. “Drug Czar” William Bennett wants more. “The bill will be big,” he says, “but the bill for not doing something will be bigger: $150 billion to $200 billion.”

It seems, however, whatever the United States spends is never enough. The federal government’s dollars seem like pennies compared with the millions the drug dealers have to spend. Often they have faster boats, more powerful weapons, and a cold-blooded lack of hesitation in killing anyone who stands in their way.

In addition, our overloaded legal system has difficulty handling the number of cases it has. In some cities, only a small percentage of adults arrested on drug charges actually serve time. Cases where the drug offender is a minor — as is true with the majority of crack offenders — mostly go through the juvenile court system. This involves a series of court supervisions, probations, and foster homes for first-time offenders. Sometimes it takes as many as seven or eight arrests before a juvenile dealer is jailed.

3 thoughts on “The Drug War And Drugs. What Do You Know About It?”