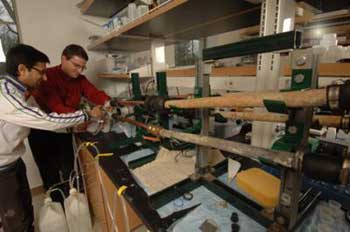 Lead is a useful metal. It doesn’t rust, it bonds with organic materials like wood, it is strong, heavy, and easy to mold. The ancient Romans hammered it into cups and plates and water pipes. In fact, our word plumbing comes from the Latin word plumbus, meaning lead.

In the Middle Ages, lead played a role in the great explosion of learning. It was used in making type for the newly invented printing press. With the Industrial Revolution, lead became an important part of many manufacturing processes and products. In the early 20th century, it found a new application as a gasoline additive, greatly improving engine performance. Today, lead is used in thousands of manufactured products, as well as in construction. Americans use more than a million tons of it every year.

As useful as lead is in human technology, the human body does not need even a minute amount of it. In fact, it’s a poison. Ingesting a piece of lead the size of a person’s fingernail can kill. Nausea and vomiting are followed by convulsions, coma, and finally, death.

Even in small amounts, lead can cause big trouble. The body takes four to six weeks to rid soft tissues of the metal after it is ingested. It can take up to 30 years for lead to leave the bones. Meanwhile, there may be temporary illness or even permanent harm.

Lead can damage the brain, liver, and kidneys. The symptoms of lead poisoning are many and varied. Lead interferes with the production of red blood cells, leading to anemia. Lead strips the myelin coating from nerves, causing weakness in the hands and feet. Even very tiny amounts can cause high blood pressure.

The danger is greater for babies and young children, and in children who are not completely healthy. (The metal is excreted very slowly from the bodies of people suffering from poor nutrition.) Children with high body levels of lead develop slowly physically and mentally, and they may have emotional problems, as well as other symptoms of lead poisoning. The U.S. Public Health Service estimates that 17 percent of American children under the age of 6 may be lead-poisoning victims. One study suggests that body lead levels may be related to succss in school: The higher the lead level, the less likely it is that a student will do well.

The U.S. Centers for Disease Control has set the maximum safe lead level at 24 micrograms of lead per deciliter of blood. (A microgram is a millionth of a gram; a deciliter is 100 milliliters.) Recent studies show that lead-poisoning symptoms in children appear at levels far below 24 micrograms, and the Environmental Protection Agency (EPA) has suggested lowering the safe lead level standard to 9 micrograms. Some researchers say that no lead at all is the only safe standard.

The Spread of Lead

How does lead get into the human body? Peeling paint is one important route. The U.S. government has reduced the amount of lead permitted in paint products, but old buildings pose a continuing threat. Their paint peels, ad children inhale airborne flakes. Very young children may eat the poisonous, slightly sweet paint chips.

Tap water can contain lead, too. Tiny amounts of lead from lead pipes and lead solder on copper pipes get into the water. In some areas, tap water is the source of almost half of environmental lead.

The largest source of lead in the environment, however, has long been the lead from automobile emisions. In 1975 alone, cars spewed more than 160,000 metric tons of lead into the air. People inhaled it. It settled onto agricultural crops and farmers’ fields and so, ultimately, people ate it, too.

Once it’s loose in the environment, lead is there for good. Years after a house has been razed, lead from its peeling paint still contaminates the site. Lead from automobile emissions is everywhere, from backyard dirt to well water.

The result is that it is estimated that today there may be as much as 500 times more lead in our bones as we find in the bones of prehistoric people. Researchers looking at layers of polar ice built up over thousands of years find 800 times as much lead in new ice as in ice thousands of years old.

Getting the Lead Out

Two thousand years ago, a Greek scientist named Dioscorides warned about the dangers of lead. In 1786, Benjamin Franklin (who was a printer as well as a patriot) wrote about workers who handled hot-lead type and suffered from lead poisoning. People have known about the hazards of lead exposure for a long time.

And they have done something about it. In the early 1900s, laws were passed to protect people who work with leads and to remove lead from many products. In the 1960s and 1970s a great wave of environmental awareness resulted in laws that banned the sale of leaded paint, outlawed the use of lead solder in the seams of baby food and baby formula cans, and phased out lead in gasoline.

This last step was important. By 1984, the amount of lead entering the environment through auto exhaust had fallen 75 percent. The result was dramatic. In 1982, a national health and nutrition survey showed that the average American blood lead level had fallen by 37 percent.

The amount of lead entering the environment has been dropping. But problems persist. Lead paint lurks in hundreds of thousands of buildings across the country. Old plumbing spills lead into the water people drink. Safely removing the paint and repairing the plumbing will cost thousands of dollars per site. Discarded lead in landfills and dumps is a continuing source of environmental lead.

It’s clear that we can get the lead out. To researchers concerned about the toll deadly lead takes on health, it’s something that must be done, and soon, no matter what it takes.