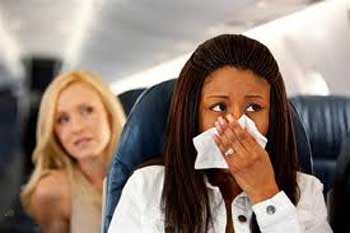 At this time of the year, it’s tantalizing to imagine lounging in the shade of a tall palm tree, looking over the shimmering waters of a tropical ocean. You watch gulls swooping down over the waves and porpoises leaping playfully in rhythmic patterns. As you slowly sip on an ice-cold lemonade, you think, “This is paradise!”

Paradise it may well be, but even paradise has its hazards. One of them is the possibility of contracting a travel disease. Such diseases range from mild malaise due to jet lag to disabling dengue fever. However, smart travelers can usually avoid illness by finding out before they go what diseases they may be exposed to while traveling.

Going to places like Canada, Europe, Australia, or New Zealand poses very few health risks for most travelers. Nevertheless, people traveling by plane across the Atlantic or Pacific Ocean may suffer from jet lag. This condition occurs when the body’s internal clock is out of sync with local time.

A simple example will show how a long plane ride can wreak havoc with the body. Pretend you are traveling to Rome. The plane ride from New York City to Rome is 8 1/2 hours long. Rome is six hours ahead of New York timewise. That means if you take off from New York at 5 p.m., you will land in Rome at 7:30 a.m. the next morning (Roman time). The city will be busy and noisy. If you were on a Roman schedule, you would probably be full of vigor. However, according to your body’s clock, it is only 1:30 a.m. (New York time). Your body feels like it’s the middle of the night–and you probably haven’t had much sleep.

As you can see, jet lag can make it difficult for a traveler to keep pace with daily life in a new place. Jet lag can cause headaches, insomnia, irritability, forgetfulness, and digestive problems. It may increase a traveler’s susceptibility to common infections, such as colds and the flu. Time is the only cure fot jet lag. But its effects may be minimized by drinking plenty of nonalcoholoci liquids during the flight, by being well-rested before the journey, and, of course, by trying to sleep during the trip. After a few days in a new time zone, a traveler’s internal clock resets itself. The only problem is that when the traveler returns home, he or she must adjust to the shift back to local time.

Although it can cause people to feel out of kilter, jet lag is not, clinically speaking, a disease. The most common of the bona fide travel diseases is diarrhea. This unpleasant ailment is known by numerous descriptive names. If you’ve been in Mexico, you might know it as La Turista, Montezuma’s Revenge, or the Aztec Two-Step. In North Africa, it is often dubbed Casablance Crud. In India it goes by the name Delhi Belly. Whatever its name, traveler’s diarrhea has the same symptoms: watery bowel movements sometimes accompanied by cramps, nausea, vomiting, fever, and weakness. A bout of traveler’s diarrhea usually lasts for three or four days. Treatment includes resting, drinking plenty of fluids, and taking a stomach-soothing medicine, such as Pepto-Bismol. Travelers can contact their doctor prior to their trip for advice on taking Pepto-Bismol or taking antibiotics to prevent the illness altogether.

The best step to take against traveler’s diarrhea is to try to prevent it in the first place. Most cases are caused by unclean food or water. In Latin America, Africa, and Asia, many regions have drinking water contaminated with bacteria. These germs can cause illness in people whose digestive system isn’t used to them. Travelers going to regions with contaminated drinking water should avoid drinking untreated tap water. Instead, they should drink only commercially bottled beverages and beverages made from boiled water, such as tea and coffee. Beverages cooled by ice cubes are safe only if the ice is made from treated water.

Avoiding unsafe food is a little trickier. Any food washed in bacteria-laden tap water can cause problems. Therefore, in regions with unclean drinking water, it is best to avoid all raw vegetables and eat only fruits with a thick, unbroken skin that can be peeled. No matter how tempting, eating foods bought from street vendors often leads to digestive problems. Inadequate cooking or lack of refrigeration allows disease-causing bacteria to grow on these street foods. Eating well-cooked food from established restaurants in tourist areas is a good idea for international travelers.

A traveler who takes on precautions has about a one-in-three chance of getting diarrhea. A careful traveler can improve on these odds. Common though it is, diarrhea must be treated seriously. During this illness, a person can lose enough fluids to become severely dehydrated. A person who becomes dehydrated may need to see a doctor and may even have to go to the hospital.

How does a traveler find a doctor in a foreign country, especially if he or she doesn’t speak the local language very well? Travelers who plan ahead before they go can get a free list of English-speaking doctors in 120 countries around the world from the International Association for Medical Assistance to Travelers in Lewiston, New York. Otherwise, travelers can usually find English-speaking doctors by contacting the staff at a large hotel or at the local U.S. Consulate or Embassy.

Although diarrhea rarely requires a doctor’s treatment, other travel diseases often do require medical attention. Many of these serious diseases are transmitted by insects. Malaria is probably the most common of the diseases spread by insects. Mosquitoes in many tropical areas of the world carry this disease. In terms of symptoms, malaria looks much like the flu. It causes fever with alternate sweats and chills and a general feeling of ill-health. However, with most kinds of malaria, the fever comes for a few days, subsides, and then returns a day or two later. If the disease goes untreated, the cycle can continue for months. People traveling to regions where malaria is common are advised to take anti-malaria medicine starting two weeks before they leave. These same medicine are also prescribed to treat the disease.

Yellow fever is another serious tropical disease transmitted by mosquitoes. The disease comes on quite rapidly, starting with a headache, a backache, a rising fever, and the vomiting of blood. After a few days, the skin and whites of the eyes may turn yellow, which is how the disease got its name. Reducing the fever and resting are the only ways to cure yellow fever. However, a vaccine is available to prevent the disease. In fact, this vaccine is usually required for travelers visiting areas where the disease is found.

The same mosquitoes that carry yellow fever also carry dengue (den’ge) fever. Dengue begins with a fever, severe joint pain, and pain behind the eyes. The fever may subside slightly and then rise again, accompanied by a rash. As with yellow fever, there is no cure for dengue. With rest, most people recover. There is no vaccine against this disease.

Because these three mosquito-borne diseases–malaria, yellow fever, and dengue–are so serious, it is important for travelers going to areas where these mosquitos breed to do everything they can to avoid insect bites. Doctors advise such travelers to use insect repellent and mosquito coils when spending time outdoors. Wearing long pants, a long-sleeved shirt, and closed shoes also affords some protection against mosquitoes. Since mosquitoes tend to be most active around sunset, staying indoors during this time of day can also help prevent mosquito bites.

2 thoughts on “Travel: Don’t Get Sick. Disease Is Everywhere”