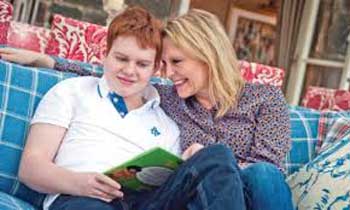 When Ginny Judson met Dick Thornburgh at the 1963 wedding of a college classmate in Pittsburgh, she knew instantly he was the one for her. “I found out he was a man of full disclosure,” she says. “On our second date – before he’d even kissed me – he took me to his house and showed me his three little boys asleep in their beds.”

Their mother (also named Ginny) had been killed in a car accident three years earlier when the children were 3, 2, and 4 months old. Peter, the baby, had sustained a serious brain injury in the crash.

Ginny and Dick were married just six months after they met. At the time, he was a 31 -year-old lawyer starting a career that would lead to such top-echelon posts as governor of Pennsylvania, U.S. attorney general, and undersecretary general of the United Nations. “One of his most attractive qualities was that he was a wonderful father,” Ginny says now. “He even asked if our wedding could be postponed a week so he could be with his son David on his fifth birthday.”

Ginny gave up her job as a grade-school teacher to become the boys’ second mother (she hates the word stepmother) but got more than she’d bargained for: “I was a naive twenty-three-year-old; I cried a lot during those first few months because I felt so inadequate. Peter was almost four and couldn’t walk or talk – a large section of his skull had been removed to prevent additional pressure on his brain. The other boys needed me too. I told Dick that I enjoyed our little boys but didn’t know if I loved them. He told me not to worry, that the feeling would grow in me.”

It did. “One night I woke up and heard Peter trying to say the word Mom,” she remembers. “There was no doubt then in my mind that I loved him and his brothers.” In 1966, the boys got another sibling, when Ginny gave birth to son Bill.

The crusade that would become her life’s work began the day she transferred Peter, then 8, to a special-education class at a public school in Pittsburgh. The room was in a dark, sooty basement where water was seeping through the walls. She stormed up the stairs and confronted the principal. He just looked at her. “These kids don’t care,” he said. “Of course they do,” she replied angrily.

She joined the local chapter of the Association for Retarded Citizens and became its president. After Dick was elected governor, she visited institutions, hospitals, and schools for people with disabilities to ensure that problems were brought to the attention of state officials. Later, she was appointed to the President’s Committee on Mental Retardation.

In 1989, Alan Reich, president of the National Organization on Disability in Washington, DC, asked her to start a program that would help religious congregations to be more welcoming to people with disabilities. A philosophy and religion major in college, with a strong Presbyterian upbringing, Ginny jumped at the chance.

“It’s not enough to build a ramp,” she says with some force. “Negative attitudes are the worst barriers of all. Many people with disabilities are ignored, isolated, or rejected, yet they have gifts to bring to their churches and synagogues. Spiritual access is every bit as important as access to health care, education, and jobs.”

As director of the Religion and Disability Program, Ginny travels the country – sometimes in the company of Reich, who uses a wheelchair – bringing her message to people of all faiths. She doesn’t think small: At Ginny’s request, Pope John Paul II convened an international conference on disabilities at the Vatican in 1992. She’s also written or edited three practical guidebooks. (“Don’t say ‘the disabled,’ ‘the blind,’ ‘the deaf,”‘ she insists. “Put the person first: ‘a child with a disability,’ ‘a man with a hearing impairment.'”)

In the living room of their sunny Washington apartment, the Thornburghs have a photograph of President Bush signing the 1990 Americans with Disabilities Act, which Dick helped frame as attorney general and Ginny energetically lobbied for. Dick is unabashed in praising his wife’s work: “Ginny truly loves people, down to the least of us,” he says. “There isn’t a person I can imagine her not being able to connect with. It’s a gift.”

Their four sons are grown now, and they have two daughters-in-law and six grandchildren, all in Pennsylvania. “Nobody has finer sons than we do,” Ginny declares. But she is proudest, perhaps, of Peter, who had to fight the hardest to get where he is. Today, Peter lives in a supervised apartment in Harrisburg and works in the warehouse of a food bank.

“There’s a quality of peace and acceptance about him that we all respect,” says Ginny. “Peter is really the glue that holds this family together.”