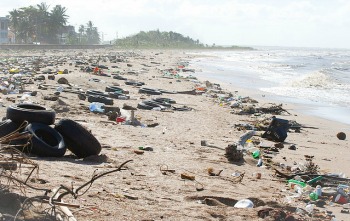 Neira describes the smoke that children breathe in from these fuels as a “hidden and very pernicious” cause of ill health, leading to childhood illnesses, such as pneumonia and asthma, as well as long-term health affects, such as poor brain development and lower IQs.

In addition to smoke for dirty cookstoves, children are exposed to many other pollutants both inside and outside the home, including untreated drinking water, outdoor air pollution and pesticide residues, the reports found.

You might be surprised to learn about these facts because you have not been to the poorer parts of Africa, but believe me when I say that this is a common issue in many parts of the globe. And what is even more disconcerting is its harmful effects on young kids.

“A polluted environment is a deadly one – particularly for young children,” said Dr Margaret Chan, WHO Director-General.
“Their developing organs and immune systems, and smaller bodies and airways, make them especially vulnerable to dirty air and water,” said Chan.
Harmful exposures can start in the mother’s womb and increase the risk of premature birth.

And the numbers do not lie.

Every year 570,000 children under five years die from respiratory infections, such as pneumonia, attributable to indoor and outdoor air pollution, and second-hand smoke.
As many as 361,000 children under five years die due to diarrhoea, as a result of poor access to clean water, sanitation and hygiene, the report said.
About 270,000 children die during their first month of life from conditions, including prematurity, which could be prevented through access to clean water, sanitation and hygiene in health facilities as well as reducing air pollution.
The report said that 200,000 deaths of children under five years from malaria could be prevented through environmental actions, such as reducing breeding sites of mosquitoes or covering drinking-water storage.

Environmental pollution should be taken seriously as it also worsens global warming and climate change issues that we are now experiencing. In the cold waters of the Arctic, oil drilling is a profitable business, which has a negative impact on the environment after a series of oil spills and other mishaps prove the negligent acts of these companies.

However, a better economy can provide jobs and help people improve their way of life and put into place better safety measures to limit the damage caused by many environmental pollutants. The World Health Organization (WHO) aims to make all places safe for pregnant women and young kids.

Housing: Ensure clean fuel for heating and cooking, no mould or pests, and remove unsafe building materials and lead paint.

Agriculture: Reduce the use of hazardous pesticides and no child labour.

Industry: Manage hazardous waste and reduce the use of harmful chemicals.

Under the Sustainable Development Goals (SDGs) countries are working on a set of targets to guide interventions for children’s environmental health, as well as to end preventable deaths of newborns and children under five by 2030. In addition to SDG 3, which aims to ensure healthy lives and promote well-being for all, other SDGs work to improve water, sanitation and hygiene, transition to clean energy to reduce air pollution, and reverse climate change – all of which will have an impact on children’s health.

Protect young children for they are the future of this planet. Live responsibly and take care of our surroundings because you won’t like it when Mother Nature strikes back.