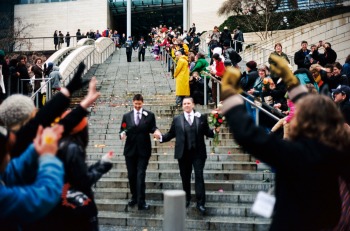 Now, Malcolm Turnbull’s fear of alienating the religious right in the Coalition has seen him agree to a plebiscite he previously opposed.

However, religious groups are making a noise once more as the number of countries, states, and cities supporting same-sex marriage has considerably grown over the years. It’s not that easy to stop them now as the public seems to be okay with it and tolerant of the growing number of married homosexual couples. Even famous personalities take advantage of this growing public acceptance and openly flaunt their marriage for everyone to see.

One thing is certain. The issues surrounding religious freedom in a society which recognises same-sex marriage will not be fully resolved any time soon. Some argue that these issues should be resolved before the public votes in a compulsory plebiscite or voluntary postal survey. I can see that opponents of same-sex marriage might want to insist on this, and that supporters of same-sex marriage might regard this as a time delaying tactic. I could vote “yes” in a survey while hoping and demanding that the parliament do the hard work on religious freedoms when considering amendments to the Marriage Act. It is important to appreciate that the legal and policy changes needed to protect religious freedom would not appear in the Marriage Act but in other statutes such as the Sex Discrimination Act.

Different places follow different laws and they also have differing interpretations of the church’s teaching. It is a known fact how homophobic the Church is in general and how they can’t accept the very thought of someone marrying the same sex but not everyone agrees nowadays even if they belong to a religion that is not accepting of this novel idea. The law is full of loopholes itself and haven’t addressed certain aspects that remain the cause of debate today but only time can tell how the Church, the different governments all over the world, and the society at large will react and see same-sex marriage in the years to come – whether it will be part of the norm or something that will persist to be a source of conflict.