Adults today can only fondly reminisce their childhood years of day-long frolic under the sun and countless hours playing outdoors and getting dirty and all. Kids today don’t lead a life as active as most adults once did. They are exposed to a digital world overruled by technology. Kids won’t have a hard time navigating a smartphone or any tech gadget, unlike most adults. Meanwhile, they lack the psychomotor skills to engage in active play and usually don’t spend as much time playing outdoors than kids before did. 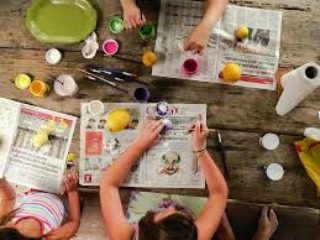 One more thing children today miss out on is the opportunity to really dabble in the arts despite the abundance of art materials, supplies, and opportunities. They can even get inspiration from the web but still, they’d rather spend all their free time glued to their smartphones and tinkering with all those apps that were unheard of in the past. Indeed, a lot has changed and in a way, new opportunities open up to children but they also miss out on others that are actually better for their health and well-being.

As much evidence will support, drawing has significant developmental benefits for young children. It gives them space to represent what they think—territory within which they can exaggerate what is important to them or express ideas they are not yet able to verbalize. Through art, children are able to describe and reveal their notions about themselves, the world, and their place in it.

The role of drawing in enhancing childhood development has been acknowledged since art education first became a part of public-school curricula in the Commonwealth states in 1870.  A wealth of research has shown a strong link between the scribbles of preschoolers and their early stages of written language and reading. Drawing also helps prepare children for success in other subject areas, including explaining and communicating mathematical reasoning, which assists in their comprehension and communication of math concepts.

More generally, extensive evidence suggests that exposure to art in school has long-term academic and social benefits for kids, especially those who are economically disadvantaged. A 2012 study by the United States’ National Endowment for the Arts, for example, found that low-income eighth-graders who had lots of exposure to the arts were more likely than their peers with less exposure to earn higher grades and attend college.

The arts depict the state of the times. Even way before, famous painters were known to get inspiration for their drawings from the events that took place in their surroundings. It is why to learn history, you simply just have to take a peek at artworks created around that time and you can picture out what happened back then. If kids now don’t get a chance to explore their creativity, then what does that mean to a future that is devoid of beautiful and captivating artworks that depict the era they once lived in?

Drawing allows us to test and play with feelings and ideas. It nurtures the verbal skills of reading, writing and speaking.

Drawing is a means of closely observing the world around us, recording what we observe and using that as the basis for further enquiry. It can be an important player in our internal dialogue as we work through conceptual challenges.

But the reality is that most children simply give up on drawing because they receive no instruction.

Children aren’t expected to create masterpieces. They are free to express what they think of and their interpretation of the world or that of a specific object or occasion as simply a means of self-expression. Not all children will turn out to be great artists but still, they need an avenue where they can express their artistic side regardless of how good they are. However, technology greatly impedes their artistry as it takes most of their time away from drawing and scribbling. It is the parent’s responsibility to indicate just how much time kids can spend in using technology and encourage them to pursue other artistic interests to enjoy a more well-rounded childhood.