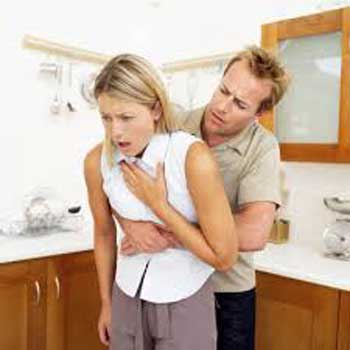 When Jim first noticed the man sitting at the next table in the fast-food restaurant, he thought the man was having a heart attack. His hand was on his chest, and he looked scared. As the man’s lips darkened in color, Jim knew he should do someting. Jim got up, walked over to the man, and asked, “Are you choking?”

As he looked back on the incident, Jim was amazed. “I was thinking it was a heart attack, but the word ‘choking’ came out, because in my health class last year, that was what I was taught to ask.”

To Jim’s surprise, the man nodded, and Jim went into action. He called out “Help!” loudly, then turned to the man and said, “I can help you.” As he stepped behind the man, Jim turned to the manager of the restaurant, who had appeared at his side, and said, “He’s choking. Call an ambulance.”

Once behind the victim, Jim wrapped his arms around him and made a fist with one hand. He placed it in the middle of the man’s abdomen, below his breastbone but above his navel. He remembered to place the thumb side of his fist against the man and then covered it with his other hand. Keeping his elbows out, he pressed his fist into the man’s abdomen with a quick upward thrust.

It took three thrusts before he heard the food coughed from the man’s throat and onto the floor. Jim heard the ambulance siren as he helped the man sit down. He was too shaky to speak, but the man took Jim’s hand and shook it vigorously in gratitude.

The technique Jim used to clear the man’s airway is called the Heimlich maneuver or the Heimlich hug. It was developed by Dr. Henry J. Heimlich in 1974 when he was at Cincinnati’s Jewish Hospital.

The maneuver is used in one way for conscious victims, in another for unconscious victims. It relies on the fact that there is always air in the lungs even when an object in the throat prevents it from being expelled. By compressing the diaphragm forcefully, that air is pushed upward against the object, causing it to pop out like a cork from a bottle.

Ordinarily, a victim would do this himself by coughing, but when the object totally blocks the airway, air cannot get in or out. The victim could die within four to six minutes.

An important step in helping a choking victim is to be sure he is choking. Jim though the man was having a heart attack because his hand was on his chest, not his throat. To find out for sure, Jim asked. He found out he was choking. Choking victims can neither speak nor breathe’ they turn blue, and eventually collapse. Heart attack victims can usually speak, if conscious, and you know they aren’t choking.

In Case of Collapse

When Jim was performing the Heimlich maneuver on his victim, his mind was racing ahead to what he would do if the man collapsed. Jim knew he would:

2. Open his airway by tilting his head back and do a finger sweep of the victim’s mouth to try to find the object. Then he would check breathing and try to give the man two breaths mouth-to-mouth.

3. If the air wouldn’t go in, he would straddle the victim and place the heel of one hand against the middle of the man’s abdomen just above his navel. Then Jim would place the other hand on top of the first with all fingers pointing toward the victim’s head.

4. He would then press into the abdomen six to 10 times.

5. He would go to the head of the victim and open the mouth, then do a finger sweep to remove any objects and try again to give air.

6. If the airway was still blocked, Jim would repeat the abdominal thrusts.

If the victim is too large to reach around, or is a pregnant woman, chest thrusts must be substituted for abdominal thrusts. To do chest thrusts, stand behind the victim and place your arms under the victim’s armpits and around the chest. Place the thumb side of your fist on the middle of the breastbone and grasp with your other hand. Give thrusts against the chest until the object is removed or the person loses consciousness.

If you are alone and choking, you can give yourself the Heimlich maneuver by placing the fist of one hand against your abdomen just above the navel and grasping it with your other hand. Make quick upward thrusts into your abdomen. You could also lean forward and press your abdomen over an object like the back of a chair or sink.

People may choke for a variety of reasons, but often it is because they tried to do two things at once: speak and eat. A mechanism in our throat called the epiglottis is designed to prevent choking. It is a flap that closes over the windpipe when you swallow so food will go down the esophagus instead of the trachea. But we can confuse this flap if we change our mind in mid-swallow.

For example, imagine you are in the school cafeteria eating lunch. You start to swallow a bite of sandwich when someone says something very funny. You want to laugh, so the epiglottis gets the message “breathe.” Since it is programmed to always give priority to breathing, the flap opens the trachea and you inhale. The bite of sandwich is sucked into the trachea and you begin to choke. If you can still get some air past the blockage, you will simply cought it up. Since coughing is the best way to clear the airway, always allow a person to cough when possible. But if no air can get in and out, or a wheezing sound is made, then the Heimlich maneuver is necessary.

The object blocking the airway isn’t always food. Children can choke on toys, especially balloons. If the balloon bursts unexpectedly, it can frighten a child. He or she inhales in surprise and a piece of balloon goes down the airway. Coins are also common offenders in choking children.

There are also some things not to do in rescuing choking victims. The old technique of hitting people on the back is no longer advised for a variety of reasons. It can lodge the object further down, frighten the person who then inhales, or damage the neck and back.

Do not wait for medical help if you are in the presence of someone with a blocked airway. Help may come too late.

Do not begin the Heimlich maneuver until you are certain the victim is choking. Ask first.

Do not squeeze the chest or abdomen with your arms. Pressure is applied only with the hands, and “hugging” could break ribs.

And remember: The victim’s life is in your hands.

One thought on “Saving Someone From Choking”