Pet lovers consider their pets as part of the family and treat them as such. They look after their needs and shower them with love and affection. In a sense, pets are like babies that are the apple of their eyes. Imagine going home to a puppy that is wagging its tail by your doorstep, excited for your return. 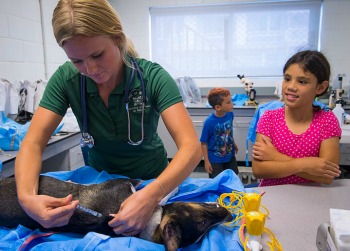 But of course, you are free to choose whatever animal you want as a pet as long as you are capable of caring for it and giving it the love and attention it needs – be it a dog, cat, hamster, fish or birds – it is up to you, and not just abandon them or leave animals in shelters when caring for them is no longer convenient for you.

Take responsibility for our pets. No excuses allowed.

Most do. Most are conscientious when it comes to looking after the well-being of their dogs and cats. Most treat them like the family members they are, feed them, bathe them, let them sleep in the house — even on the furniture. Key is, they keep them, to the end. If they can’t, they do their best to find a home for them before giving their dog to KHS.

Like humans, pets get sick too. Both young and old, pet animals can succumb to sickness and suffer in silence. They are not humans who can speak and say exactly what they feel or say where it hurts the most. They can only whimper in pain and hope that their owners will understand what they are going through.

An emerging controversial treatment for sick pets – dogs and cats to be specific – is the use of cannabis. Just like with humans, it elicits mixed reactions with those for and against its use.

As more states legalize marijuana, more pet owners are giving medical-cannabis products to their furry companions to treat a range of ailments.

Well, veterinarians say there isn’t enough scientific data to show that cannabis is safe and effective for treating animals.

Medical marijuana is legal in 28 states, but remains illegal under federal law, so there’s been little research into its potential health benefits for people or animals.

Despite the lack of scientific data, many pet owners are convinced cannabis has improved their animals’ health and well-being based on their own observations.

Despite appearing to be helpful in restoring the health of sick cats and dogs, some experts in the field oppose its use because again, there is insufficient scientific data to back it up.

Michael Fasman’s 12-year-old dog, Hudson, limps from pain caused by arthritis and an amputated toe, but Fasman doesn’t want to give her painkillers because “they just knock her out.”

So the San Francisco resident has turned to an alternative medicine that many humans use to treat their own pain and illness: marijuana.

On a recent morning, Fasman squeezed several drops of a cannabis extract onto a plate of yogurt, which the Portuguese water dog lapped up in seconds. It’s become part of Hudson’s daily routine.

“We think it’s really lifted her spirits and made her a happier dog,” Fasman said. “It’s not that she’s changed. She’s just back to her good old self.”

As more states legalize marijuana for humans, more pet owners are giving their furry companions cannabis-based extracts, ointments and edibles marketed to treat everything from arthritis and anxiety to seizures and cancer.

Cannabis treatment in pets will continue to be a sensitive topic just like with humans. The medical community should have an open mind about it to find out whether it can be of help in the medical treatment of both man and animals. They should persist to conduct studies and clinical trials to determine the safety issues involved in its use ad how we can all benefit from it in time. Until then, talk to your pet’s veterinarian and find out the best management for your pet’s condition without putting their lives at risk.