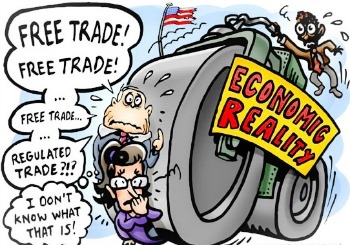 The economy is in a better shape now than it did eight years ago when former President Obama assumed office but Trump has even bolder plans to make America great again. He may have high hopes in repealing Obamacare but the Republicans are struggling in replacing it with a better health care law. Meanwhile, his other policies focus on infrastructure and tax reform.

In short, while investor confidence in the Trump administration’s pro-growth philosophy remains high, doubts are beginning to emerge about its implementation. Investors are beginning to ask how potentially conflicting priorities can be resolved. Those concerns are only likely to be assuaged when specific, growth-friendly legislation in areas such as taxation, deregulation and infrastructure spending makes headway in Congress. And that typically requires presidential leadership.

Our view is that market trends that began to emerge in the second-half of 2016 are likely to persist, albeit more gradually. U.S. and global growth continue to improve. Inflation appears to have bottomed in the U.S. , Japan and much of Europe, but is only likely to rise at a gradual pace. China continues to grow steadily, even if its imbalances remain unaddressed. Recessions are giving way to better growth prospects in Russia and Brazil.

Trump does not only implement his America first policy within the U.S. but even on free trade too. He initially planned to break trade agreements previously made to other countries like China but fortunately has not acted upon them yet. If so, it can likely lead to a trade war where no one wins and everyone suffers and make other places no longer hospitable to Americans. For instance, European countries like Austria will see the U.S. in a negative light and affect trade relations between both countries.

Trump’s new protectionism—putting America first—will not help those he claims to speak for, and it will not help the economy as a whole. It will give us a country whose influence in the world is by far diminished. The world will become a less-friendly place, either in support of our values or of our interests. The U.S. was able to play the role of leader of the free world partly because of the size of our economy and of our military forces, but partly also because we were trusted. Others recognized that, in the end, we would do what was in our self-interest—no American president could do otherwise—but we took an enlightened and long-term view of what “self-interest” meant. In announcing his “America first” policy, Trump is, in effect, announcing that we will be selfish and shortsighted—a country that cannot be trusted to honor past commitments and therefore cannot be trusted to honor future ones.

Economics is a tricky topic since nothing stays absolutely constant. Moreso, bad economic policies can significantly affect relationships with other countries, something that is looming on the horizon if the new U.S. president acts the way he does in business and during the last election. Even areas of culture and the arts may be affected. We can only cross our fingers and hope that President Trump stays level headed before making any drastic economic policies that can backlash with a vengeance.