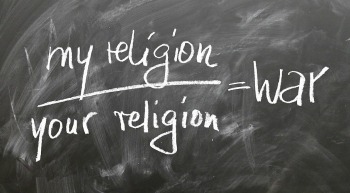 It’s sometimes difficult, looking from a male perspective, to immediately notice all of the ways that women are treated less equally than men in so many aspects of their lives. There are the obvious ones: the gender pay gap and lower levels of representation in public life, that no-one could miss, but sometimes we just don’t see inequality for what it is.

Religious custom can be so embedded, for so long, that many men fail to even recognise it as inequality. That can be the problem. From insisting that women cover their heads, to refusing to shake women’s hands, women have been, and still are, treated as less than men by most religions, not just Islam.

Arguably, gender inequality continues to be the basis of much religious hierarchical power, irrespective of whether you are Christian, Muslim, Hindu or Buddhist.

Aside from that, many wars have been won or lost because of religion. And I am not talking about historical accounts – think of the Great Holocaust – but present-day scenarios especially in the East. Countries have been ravaged by war and its citizens displaced because their homes are inhabitable anymore. People of color are continually prosecuted and discriminated because of the paranoia of the West linking them to terroristic activities.

Shortly after September 11, 2001, then President George W. Bush spoke directly to Muslims. “We respect your faith,” he said, calling it “good and peaceful.” Terrorists, he added, “are traitors to their own faith, trying, in effect, to hijack Islam itself.”

Recently, TODAY’s Matt Lauer reminded Bush of his words. “I understood right off the bat, Matt, that this was an ideological conflict—that people who murder the innocent are not religious people,” Bush explained.

Those words epitomize an important, but controversial question: is someone who acts violently in the name of a faith truly a member of that faith? According to recently highlighted data from the Public Religion Research Institute (PRRI)—which focuses primarily on Christian responses to that yes/no question—potential answers may result in a “double standard.” Christians are more likely to say that other Christians acting violently are not true Christians, while failing to provide the same latitude for Muslims.

If only all religions are open-minded and more compassionate, there will be no room for hate and extremism. We must acknowledge that there is indeed one God even if we call Him many names and that we practice various ways to honor Him.

Violence only begets violence. It becomes an unending cycle of hate and vengeance that is more divisive than any other issue we are facing right now. Religious violence has been around since the beginning of human civilization but that does not mean we have no capacity to make the shift and put an end to it by being a brother or a sister to everyone and prefer to see the good in everybody.